A small, but eminently select group left a damp and cool Manchester airport on Thursday 23rd August for a visit to the Holy Land. I am co-leading the trip with Brian Jolly (Altrincham United Reformed Church).

For some it was a return visit but, for most, it was their first experience of the land in which our faith was made flesh and lived amongst us.

With no delays to the flight we arrived in Ben Gurion airport to be met by our old friend Khalil Abdinnour and our driver, Loay.

Arriving at our hotel in Bethlehem an hour later (the creatively entitled Bethlehem Hotel) our rooms were allocated and we had a late dinner before heading out for a walk up to Manger Square to meet with Jack Giacaman, an olive wood carver who has been a friend of Brian’s and mine for many years. We shared a drink in the Square Cafe before Jack shuttled us back to the hotel.

An early start meant that we could get to Heridion before the sun got too hot for the steep climb to the top of Herod’s summer palace between Bethlehem and Hebron.

One small problem was that the lift got stuck on the way down to breakfast. I’m not at my best in enclosed spaces and, as Brian, Kath and I got on at the top floor, it wasn’t US that overloaded the lift. I reckon it was the 2 French women who got on at the 6th floor (I don’t actually know if they were French, but I’ll blame the French anyway!) Thankfully, Brian presses the alarm button and the lift started moving before I succumbed to total panic!

I hadn’t been to Herodion for 10 years and was pleasantly surprised at how much the excavations had developed including, 2 years ago, the site of Herod’s tomb…

Lunch was at the Tent, a restaurant stylised like a Bedouin tent, before heading up towards the main checkpoint gate to visit the Caritas Baby Hospital. This hospital, established in 1952 by a Swiss pastor, provides the only specialist paediatric care in the whole of the West Bank. Costing $10,000,000 a year to operate, 93% of its funding comes from donations. We took the opportunity to see, up close the section of the ‘separation wall’ which encloses Rachel’s tomb.

We then passed through the gate to get views of Jerusalem Old City from the Haas Promenade, Mt Scopus and the Mount of Olives.

Heading away from Jerusalem, down the other side of the Mount of Olives we stopped off at Bethphage – from where Jesus began his triumphant entry into Jerusalem on a donkey on Palm Sunday.

Carrying on, as if we were going to Bethlehem before the barrier was built, we came to Abu Dis; a town completely bisected between Jerusalem and the West Bank. We could see the way the wall cut straight across what once was the main route from Jerusalem to Jericho The journey now is much, much longer.

Getting back to the hotel we decided, after dinner, that we had done quite enough walking for the day so a meeting in the hotel bar and a sociable drink afterwards ended the day on a very pleasant note. I am a big fan of Taybeh beer 🙂 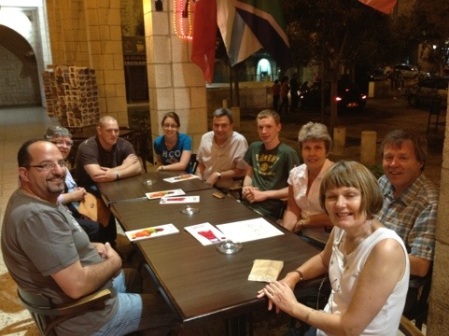 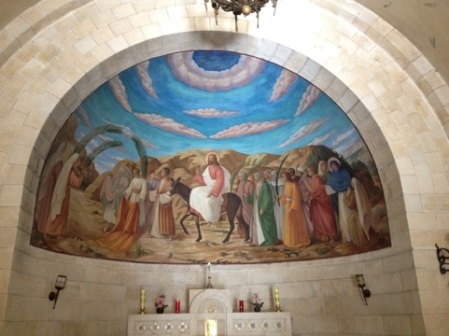 This entry was posted on Friday, August 24th, 2012 at 7:00 pm and is filed under Work in the Holy Land. You can follow any responses to this entry through the RSS 2.0 feed. You can leave a response, or trackback from your own site.